"On the weekend of 31st May to 2nd June we were lucky enough to be treated to the second fabulous New Forest Wildlife Camp, which was run by Wild New Forest, and generously supported by The Cameron Bespolka Trust.

We were a group of 15 children and teenagers ranging from age 9 to 17 years old. We arrived at the Countryside Education Centre (CET) in Beaulieu on Friday afternoon. This year we were split into mentor groups of 3 youngsters, and each assigned an expert mentor. Initially we did a fun wildlife quiz and got to know each other.

After the amazing buffet dinner, we headed out at sunset to Beaulieu Heath, for a guided walk and birdwatch. We saw newts, toadlets, heard the elusive nightjar, saw woodcocks flying across the horizon, saw a large group of deer, and a possible rabbit (however not everyone agreed with this sighting!). We put the moth traps out before going to bed on our return to the CET.

Saturday morning, at 5.30 the moth enthusiasts got up to check the traps. At 6am the remainder of the camp woke to have breakfast and get ready for the day ahead.

We met Marcus Ward and his team of Hawfinch enthusiasts: Andy, Jamie, Tommy and Kate (who left at 4.30am) at Marcus’s Hawfinch ringing station. They had caught a female Hawfinch and two Siskins, on which they did a ringing demonstration. Next, we went off with Tony Davis to find some Wood Warblers, while Marcus stayed back at his ringing station to see if he could catch any more birds. We found the Wood Warbler because of its coin-spinning noise, we saw it majestically flitting in the canopy of a birch forest. We returned to Marcus’s ringing station and he had caught two Hawfinches (a male and female), two Bullfinches (male and female) and two male Siskins. 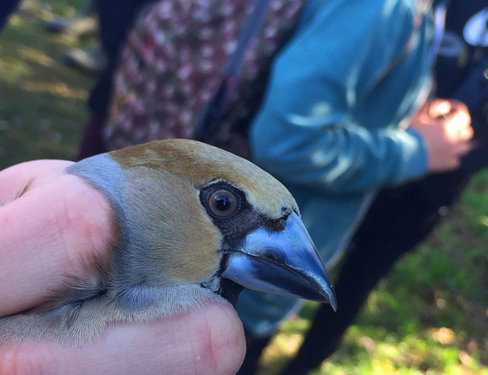 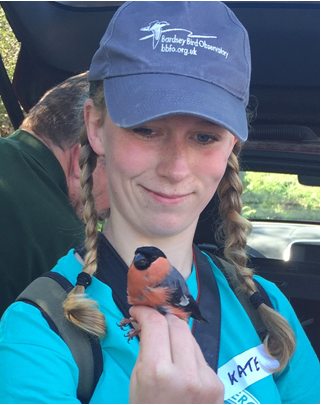 Tony took us to see two nests. Then we had a master class on Hawfinch tracking, where we tried to track a Hawfinch but with not much luck. We walked to a lunch spot and on the way there we saw Firecrests, Goldcrests and a wood pigeon nest. We looked for a grey wagtail nest, however we found the nest but unfortunately there was no birds. We had our lunch and headed back up the path when we were lucky enough to see a perching Woodlark.

In the afternoon we met up with Richard Reeves a very enthusiastic Botanist and Ecologist and we went on a bog walk to learn about the plants and species in the heather land and bog areas. He talked about how the land around us was formed and how it is being managed. We did spot two adult Curlews with their chick.

We returned to the Countryside Education Trust for ice creams and put up some mist nets in the garden and went bug hunting. We ate a brilliant vegetarian BBQ, followed by a talk from Tony Davis about jobs in wildlife and a talk about the Cameron Bespolka Trust from Corinne and Tommy.

At 8pm we set out on a Nightjar and bat walk. Tony, Marcus, Andrew, Tommy and Kate set up mist nets to try and catch a Nightjar. We saw a Common Pipistrelle bat and we managed to see a Nightjar in the hand! On our return to CET we set the moth traps up and had a good night’s sleep. 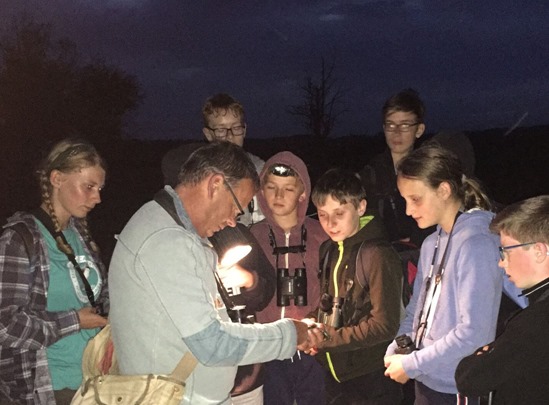 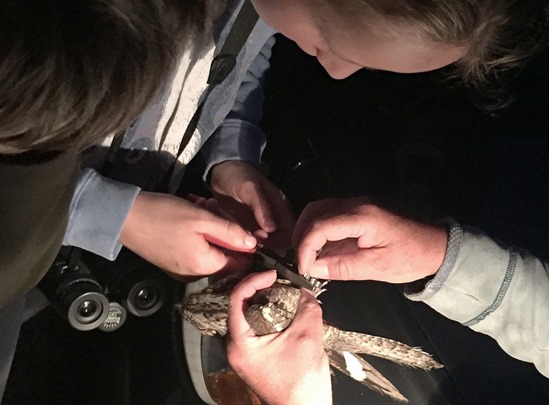 Sunday morning, we were up at 7am. After breakfast Russell Wynn talked to us about the rare moths we had caught. We caught a Poplar Hawkmoth, a Privet Hawkmoth, a Buff Tip and a Scarce Merveille Du Jour.

We set off in the minibus to Keyhaven marshes. We were greeted by Andy Page and a Stag Beetle he had trapped in his moth trap. Pete Durnell (Hampshire councils countryside manager) expertly guided us round Fishtail and Butts Lagoon. Highlights where Breeding Avocets, Little Ringed Plover, Little Tern and Egyptian Goose and breeding Peregrine falcons on the shingle.

Our next adventure was returning into the forest to watch Andy Page (head of Wildlife management at the Forestry commission) ascend a very high Pine tree to reach a Goshawk nest to ring the chicks. These were then passed down on a rope system to Nigel Jones who safely rung the chicks with the help of trainees and then returned then back to Andy to place into the nest. 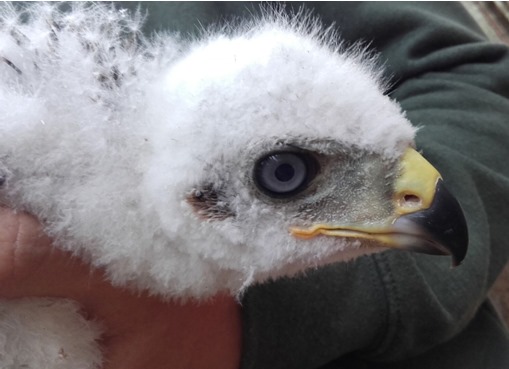 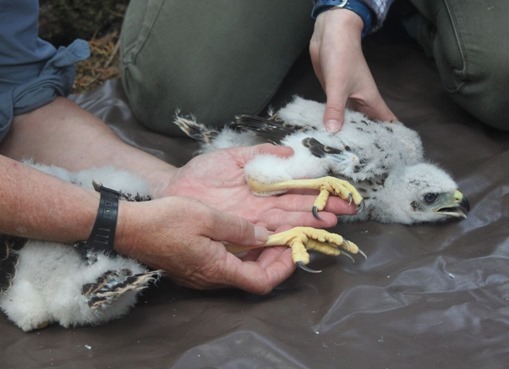 One last treat was to meet Simon Currie, who took us to a Lesser spotted woodpecker nest, where, from a distance, we quietly watched the male and female feeding the chicks. And as a bonus saw a tree creeper nest!

All thrilled and excited by our amazing weekend we returned to the CET for ice creams and a debrief. We listed the bird species we had seen which amounted 109 species (beating last year’s total of 101!). 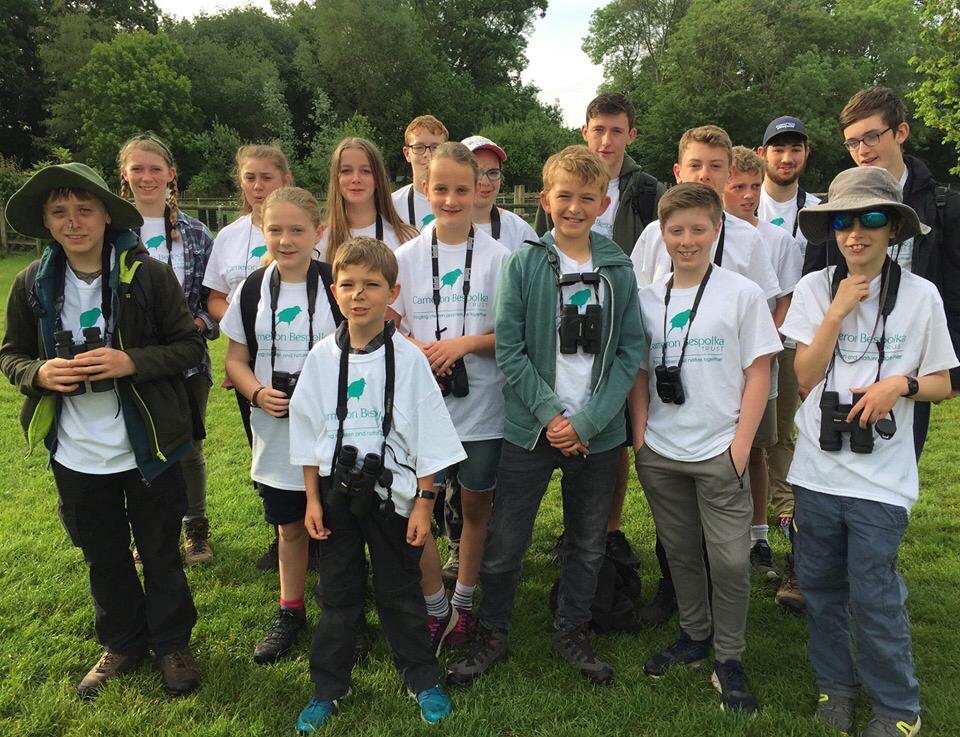 I think we may have exhausted Russ and Marcus! On behalf of all the attendees I would like to thank Wild New Forest (Russ, Marcus and their wives, children and parents), The Cameron Bespolka Trust, Andy Page, Tony Davis, Nigel Jones, Andrew Colenutt, Tommy Saunders, Kate Fox, Richard Reeves, Pete Durnell and Simon Currie. Without their expertise, enthusiasm and generosity this weekend experience would not be possible."