At this time of year, the night sky is comparatively still to that of mid-summer. On top of the absence of various other forms of nocturnal life, there is a distinct lack of mysterious furry mammals energising the still night sky, and, but for the infrequent owl calling lustfully into the cool winter’s air, the atmosphere remains eerily void of any apparent life. The mysterious furry mammals I refer to, of course, are bats.

Making up close to a quarter of our resident mammal species here in the UK, we have 17 breeding species native to a variety of different habitats, and each with their own specific lifestyle traits. 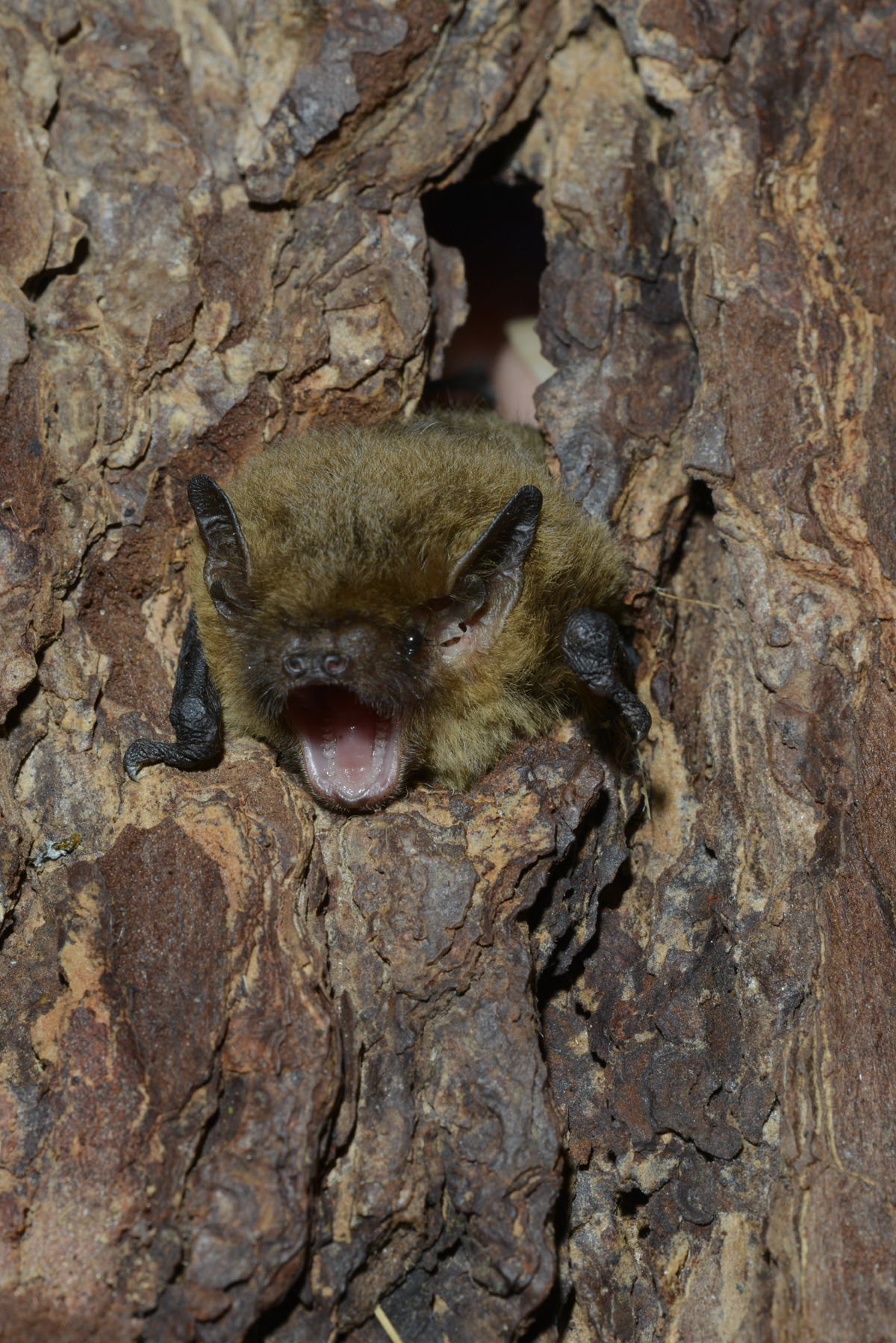 Did I say 17 species? Maybe it’s 18
Officially, the UK has 17 native species of bat exciting our summer skies, but there are technically 18. The extra non-breeding species accounts for inevitable bat vagrants blown in from the European continent, like the greater mouse-eared bat (Myotis myotis), which has been recorded hibernating here in the UK since being declared extinct in the 90s. To try to immerse you in bat surveying culture, I may use some of the ‘less official’ terminology which we often use when referring to the bats on survey.

The tiny, Common Pipistrelle or ‘Common Pip’ (Pipistrellus pipistrellus) constitutes for roughly three quarters of bat sightings across the UK, mostly due to their erratic foraging behaviour and flight style, their relatively versatile tendency to roost in a cosy gap beneath roof tiles or cladding, and their sometimes-audible means of hunting and communicating – echolocation. The Common Pip tends to echolocate at around 45kHz. It has two close relatives in the UK, the Soprano Pip (Pipistrellus pygmaeus) and Nathusius’ Pip (Pipistrellus Nathusii) – both with Pip also being short for Pipistrelle. Despite echolocating at a much higher frequency of 55kHz and being noticeably smaller, the Soprano Pip was only formally separated from the Common Pipistrelle species in 1999. Nathusius’ Pip was formerly classed as a migratory species, but I suppose a warmer, more hospitable winter has led to them becoming an established UK species too.

The Noctule (Nyctalus noctula) is the largest bat found in the UK. Even in spite of its gargantuan status, and noticeably large size when spotted in flight, it is still no bigger than the palm of ones’ hand. Noctules fly in a straight line, and can often be heard with the ‘naked ear’ from a relatively high elevation as they can travel many miles at dusk to forage.

Having brushed over the more common species, I have just remembered that this isn’t an essay! To summarise some of my favourite bats, the Brown Long-eared Bat, Lesser Horseshoe, Barbastelle, and the Myotis genus in general, are all certainly up there. I will reference a further few, but save others perhaps, for a later date.

The Brown Long-eared bat or ‘BLE’ (Plecotus auritus) is a charismatic bat, most recognisable by its hugely disproportionate, but equally charming, ears. Unlike most bat species, the Brown Long-eared bats rely less on echolocation and often use their massive ears to listen for prey. As a bat surveyor, this lack of echolocation often makes them difficult to pick up on a detector, that is unless they are flying right into you!

The Western Barbastelle or ‘Barb’ (Barbastella barbastellus) is a rare and elusive species, native to southern parts of the UK, and is one of very few mostly black bat species. Many people liken the face of Barbs to a pug, and it is easy to see why! Upon seeing my first Barb earlier this year in a secluded barn, I was struck by this likeness, with rounded ears and a short, upturned nose. It is unusual to find a Barbastelle in a barn, as they much prefer roosting and foraging in woodland areas.

And just like that, at dawn, they disappear! But where?
For an amateur, it is very difficult to work out where our bats go. As mentioned earlier, the Pipistrelles, along with some other species of myotis, are crevice-dwelling. This means that they prefer to roost under cladding or roof tiles, for example, tucked and pressed into a tiny, warm and dry gap. But this is not the case for all species.

The Brown Long-eared bats, for example, are what we call cavity-dwelling or roof-void dwelling species. Other roof-void dwelling species include the serotine, the barbastelle and Daubenton’s myotis. The difference with the BLE is that they also prefer flight space within a certain type of roost, making roof voids, with a tiny draught and good insect number, the perfect option.

Woodland and caves are the natural predecessors of the anthropogenic roof. Large trees, like a mighty oak or an old beech or ash offer both the options of crevice or cavity roosting for bats, and caves, while more suitable for those cavity-dwellers, can also throw up some crevice-dwellers too. A tree with bat activity will often have ‘lived in’ scars of excrement or urine running down from a hole in a tree, and if you look at the hole carefully, you may also notice some ‘scuff marks’ where the bats use it as an entrance. Be sure to look out for these trees on your next woodland walk!

Another difficulty with finding where your bats disappear off to for the diurnal day – be honest, we have all tried – is that many species and individuals will have alternative roosting sites, often three or four, that they use rotationally. They do this to reduce the risk of predation, which makes sense, but it also makes it three or four times harder for us inquisitive bat-lovers to find them… How clever!

If bats are THAT much smarter than us, can’t they protect themselves?
No. That’s the short answer. In the 15 years following 1978, our most common and versatile bat, the Common Pipistrelle, declined by a massive 70%. On the whole, the 20th century was a dreadful time for our bats, with declines across the board.

Thankfully, the last few decades have seen our bats get the support that they need. Numbers of all species in the UK have reached a stable position, and many have begun increasing once again. With ever-growing recognition of the need to preserve our biodiversity, along with conservation activists, young and old, taking stage to voice their concerns, British Wildlife, including of course the massive quarter of UK mammal species that are the bats, have been getting that all important metaphorical spotlight (of course a literal spotlight is terrible for them!).

This great triumph isn’t over. Our wildlife, and our bats, must continue to be revived. Working in ecology has opened my eyes to new conservation heroes, away from the big stage and the universities, and on building sites and developments. As our nation grows in population and infrastructure booms, conservationists have been working tirelessly to ensure that this inevitable surge in development is sustainable, green and supportive to a huge range of wildlife. Bat mitigation strategies designed to benefit the bat species present as well as suiting the architectural design, ensure that architects and construction workers are aware, satisfied and maybe even excited to consciously support wildlife in their work. Striking a balance between the need to construct and the absolute necessity to support wildlife, like our bats, is a difficult job, involving trust and mutual respect between multiple parties. 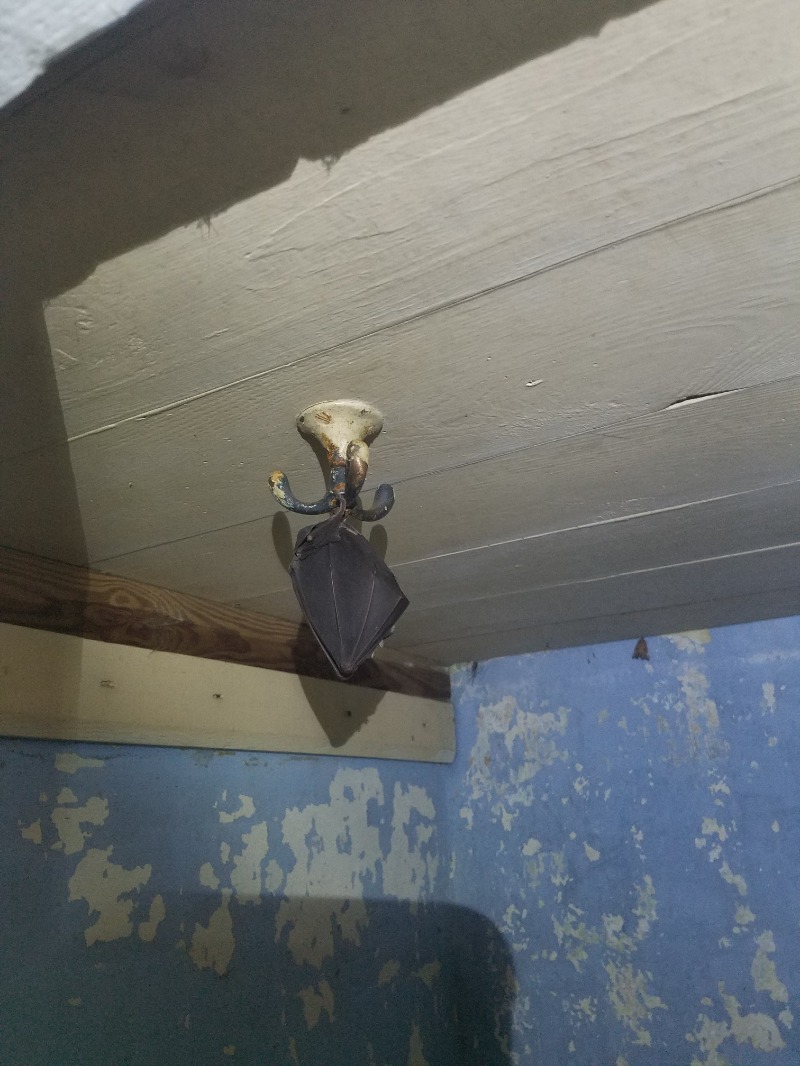 The entire loft of the cottage, as well as some visible, external bat boxes, have been made bat-friendly. Nestled in the heart of extensive, damp, historic woodland, the cottage aims to fit in seamlessly with the roosting and foraging opportunities of the surrounding forest.

The renovation of the cottage gave architects and roofers the opportunity to open the cottage up to more species of wildlife than ever before, while keeping it sustainable and insulated. In fact, one of the roofers, Steve Cuff, is a great friend and mentor of mine, and is a passionate bird and wildlife watcher. With people like Steve on site, careful thinking was all that was needed when planning how to support the bats. Cavity-roosting species in this region, like Brown Long-eared bats and Greater Horseshoe bats, will certainly benefit from the design, and I can’t wait to spend the night there with my bat detector!

While the tiles on the roof may not quite be entirely suitable to our crevice-dwellers, carefully sustainable insulation techniques to lower emissions from the cottage will have compensated for this. We could yet see cladding or tiles pop up elsewhere, perhaps on the outdoor laboratory! Other species, however, will certainly be documented in the surrounding area, and I have high hopes for frequent recordings of Pipistrelle and Myotis species, Noctules and Serotines – perhaps even the odd Barbastelle! If you are one of the lucky ones to stay the night at Cameron’s Cottage once it's open, be sure to keep an eye (or a detector) to the sky, it is certain not to disappoint!

60 Second Zoology - Pigeon Navigation / 20.01.21
We are all familiar with the feral pigeon, but have you ever stopped and taken a closer look? These …
read more