Fair Isle; it’s a small isolated island no more than three miles long and a mile wide situated in the North Sea just 24 miles south of mainland Shetland. For those reading this who are Birders then this isle of legend needs no introduction, but for those who aren’t here’s a brief description. 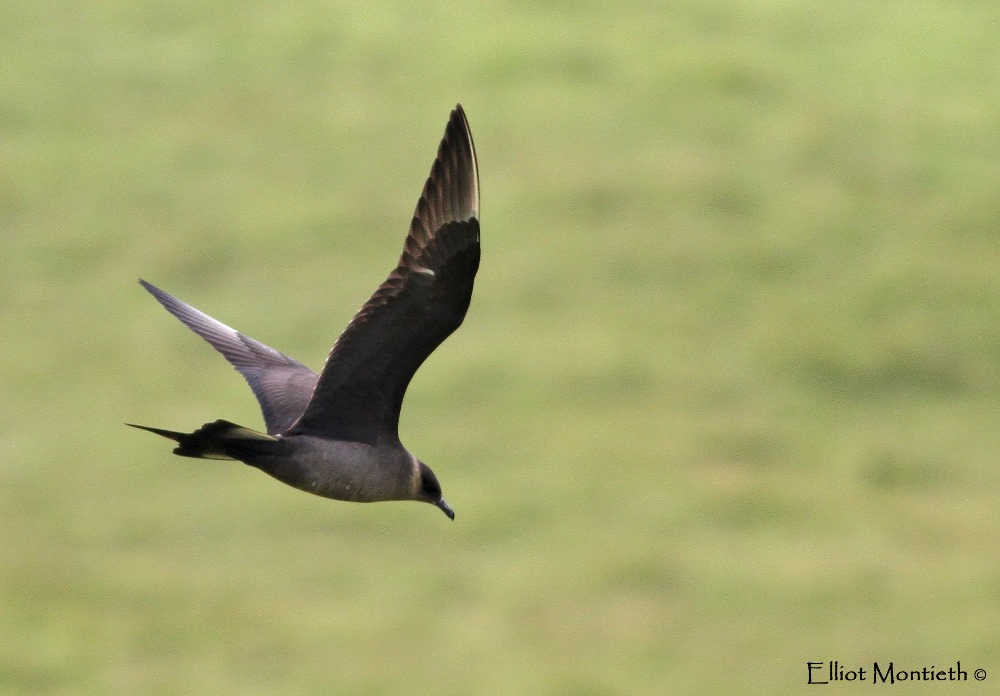 The isle is a haven for Birders & Twitchers alike; from its breeding seabird colony which is over 50,000 pairs strong, to breath taking scenery, endemics and with its extensive history of rarities, it’s got a little something for a wildlife enthusiast on every level on to enjoy. But there’s a problem, and it’s getting there. 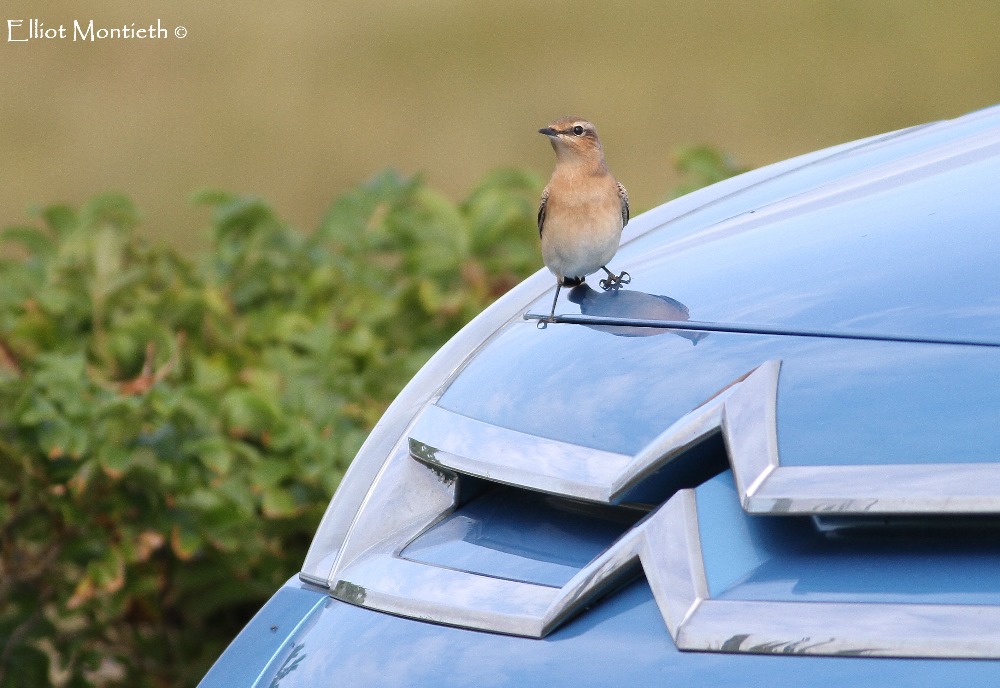 Growing up in my early to mid-teens, the words ‘Fair Isle’ usually coincided with a rarity and the list is endless, name it and this islands probably had it: Blue-cheeked Bee-eater, Song Sparrow, Western Sandpiper, Blackburnian Warbler, Siberian Rubythroat, Magnolia Warbler…Eurasian Blue Tit; the island’s bird list is 388 species which is 62.68% of the current British list. For many it’s the fact it’s a rarity hot spot that draws in the crowds, but there’s more to Fair Isle than that: There’s the opportunity to be enriched in the islands diverse history and culture as well as have the opportunity to volunteer at the Fair Isle Bird Observatory. Given how the latter is an area of employment I wish to one day enter, the chance to gain experience at the Observatory was an opportunity I couldn’t refuse! So, after two days traveling I arrived on the doorsteps of the observatory, ready to endure two weeks working as part of the wardening team. 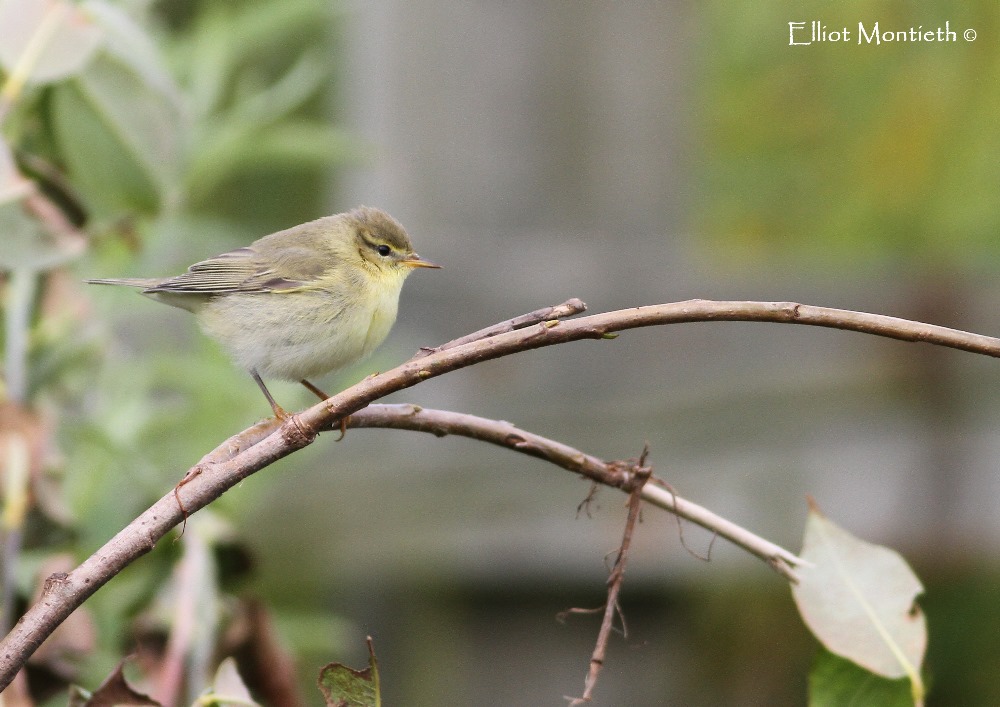 Now, as mentioned above, the one problem is getting there in the first place. For me coming from the Wirral peninsula, I had to catch a train from Birkenhead Central to Chester, Chester up to Wigan North West, then to Haymarket before Dundee and finally arriving in Aberdeen. All before getting the overnight ferry to Lerwick which was followed by a forty minute journey to Grutness and ending with the three hour crossing to Fair Isle via the Good Shepherd. It’s the longest solo trip I’ve done on public transport so if you’re wishing to go, I’d advise make sure you’re confident enough to do so. Secondly, if you’re a poor student like me, then covering the cost of it is a challenge to say the least! However, there are grants out there for young people to take advantage of. For my trip, I’d recommend that to cover the cost of accommodation for Fair Isle, you use the British Birds (BB) Young Birder’s Grant which goes up to £250 and you can acquire the full amount for two consecutive years. As for the cost of transport, then if you can apply for the JHMF Grant which is offered by the observatory. Though this is only permitted for those who choose the cheapest method of transport to get to and from the obs. If anyone wishes to discuss transport and/or the grants then feel free to get in touch via email – elliotpmontieth@gmail.com. 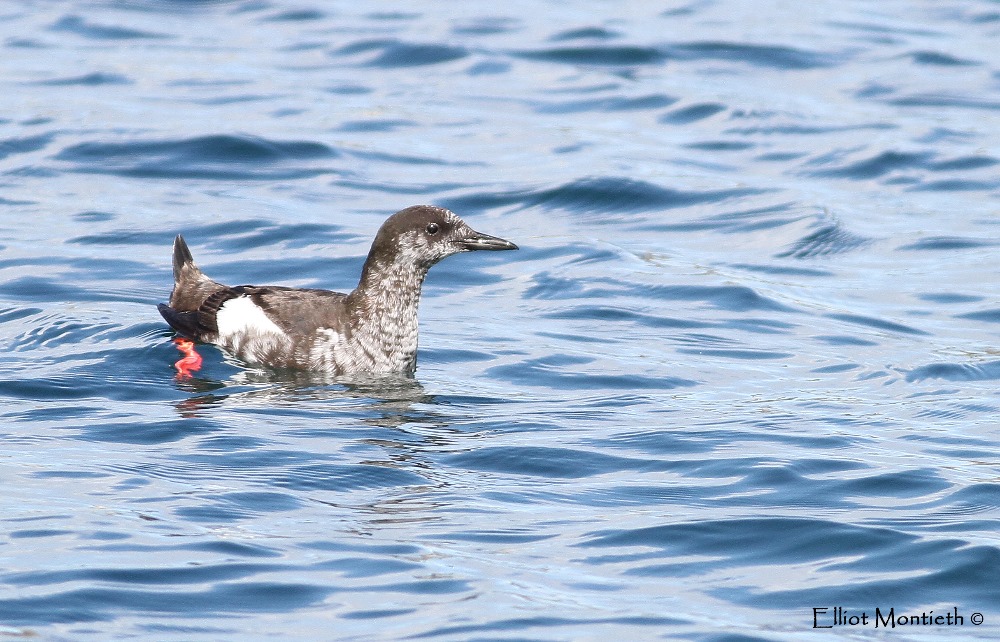 Last year I was fortunate enough to have been offered an internship at the Bardsey Bird & Field Observatory, having have hard previous work experience at an island observatory then it was interesting to compare and contrast the work of Bardsey to Fair Isle. On both the first ‘job’ of the day was the daily census, for Bardsey it would take perhaps an hour however for Fair Isle it could take as long as four hours, hence it was performed after breakfast and lunch. The census routes for Fair Isle were also a lot more intense, the north census of Wardhill (217m high) was the make or break for some previous volunteers. Hence why you need to be above the average fitness level. Besides the daily census work tally up the islands migratory species, a census was carried out to monitor the islands breeding Common Eider (ssp.) population. Census work aside, other work that was handed to me and fellow volunteers of the Wardening Team: Ben Moyes, Toby Carter and Tom Gale…yep the legend himself! Featured repairing the islands Heligoland Traps, managing vegetation of the observatories garden and island residents, inputting the islands census/log data, plastic patrols along North & South Haven, documenting (species, age, sex, types of remains & possible cause of death), the bodies of birds that had been washed up, inputting ringing records onto the IMPR data base, finishing off the islands Atlantic Puffin breeding monitoring, ringing the chicks of Northern Fulmar, general assistance at the Observatory and adding fencing to the observatory grounds. The sheer quantity, as well as diversity of work that was expected of us something I was personally impressed by as it was the kinda stuff I’d been looking to do. 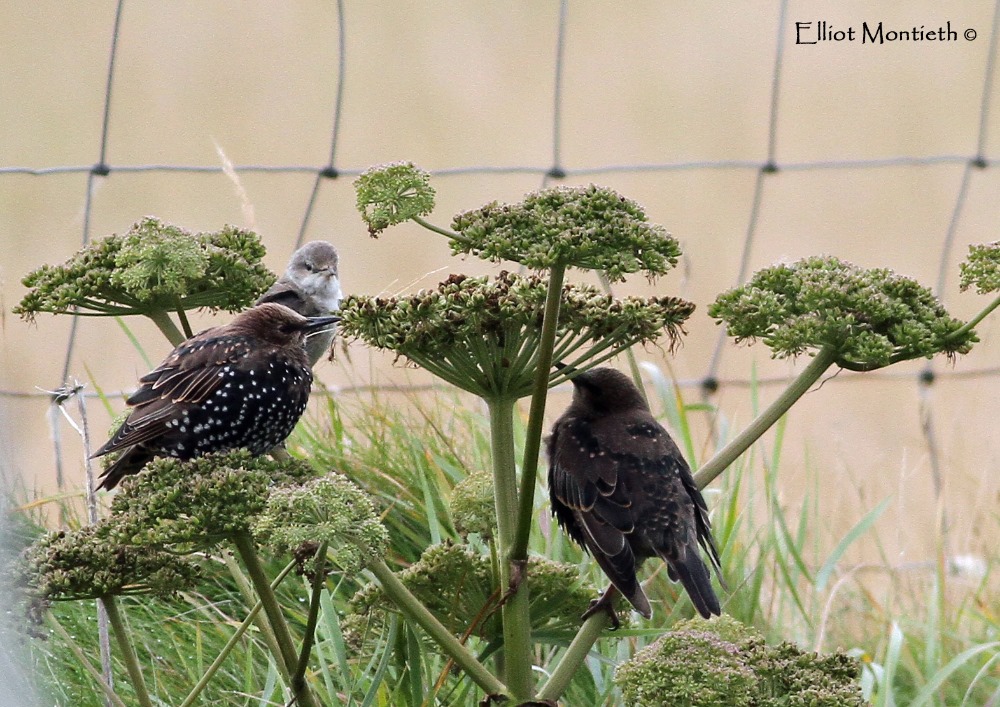 The experience I gained over the last two weeks on Fair Isle was as is all experience, vital for proving that I have what it takes to work in such an environment. But as well as being worked to bits there was time to indulge myself in the islands rich wildlife and culture. Those who know me from social media, or have seen my ‘British List’ will know that I’m a subspecies obsessive, I could go on but I’ll leave my fix for another post. Anyway, during my stay on the island there was a few ‘decent’ birds around with my arrival on the 16th just happening to be the day that an Arctic Warbler was found by Assistant Warden, David Roach and Intern Tom Gale. Not a lifer, but an education bird to say the least (still need Greenish Warbler) and through my neat Viking Kestrel ED binoculars which I’ve added a bit of bling to (Darvic & metal ring of a Great Skua), it was for a ‘leaf warbler’ a truly beautiful specimen. The warbler was the only BBRC bird of the trip but other scarce migrants where recorded over the two week period. 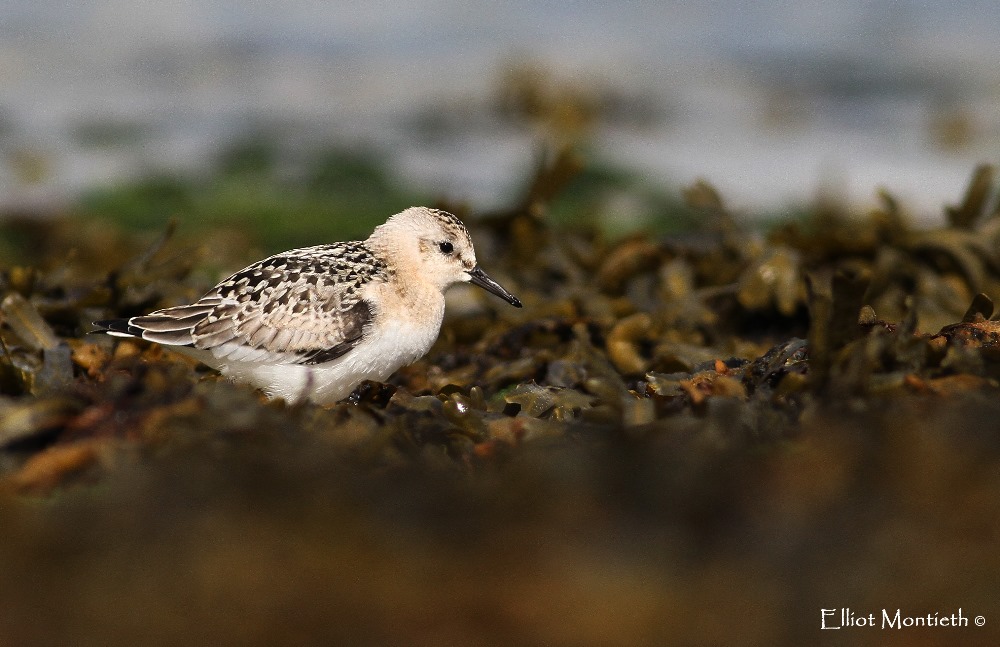 Whilst out with Tom on census on the 18th he found a 1st winter Barred Warbler at Burkle, which was my 317th British bird and it was just epic seeing this monster of a warbler bombing it around the home owners garden. By the time I left a grand total of eight birds were documented and I’m glad to say one of them was found by yours truly. In addition to adding Barred Warbler to myself found list, another expected lifer from the trip came in the form of a juvenile Common Rosefinch, which graced my ears calling before coming into view as it came in off the sea at South Light on the 20th at 0530. I’m going to be honest, I was for the first week let down by Fair Isle as I didn’t realise how shockingly bad it, and Shetland for that matter was for sea watching. But, when it came to sea watching, my favourite kind of birding…dead as dead can be. A good sea watch off Fair Isle is like a good sea watch in Birmingham, it just doesn’t happen. I had more on the ferry over than on the island itself, saying that my vomit was a pretty decent way of attracting European Storm-petrel and Northern Fulmar in.

Continuing with the scarcities, Marsh Warbler, a nationally scarce migrant associated with the spring, made an unseasonable, however not unheard appearance on the island. The first of the two birds was found on the 27th in the observatory by T. Carter, T. Gale, B. Moyes and D. Roach who put it down as a Eurasian Reed Warbler. However once we’d all gone on census (wrong day to have a lie in!), that morning Warden David Parnaby trapped and ringed the bird who re-identified it as a Marsh Warbler. The latter bird was briefly seen the following day, but with no sign of the observatory bird it was put down as the obs bird just relocating, however when I up to attempt record shots well…unringed! On the ‘interesting to most’ list then this was the closest Fair Isle struck for a rarity. 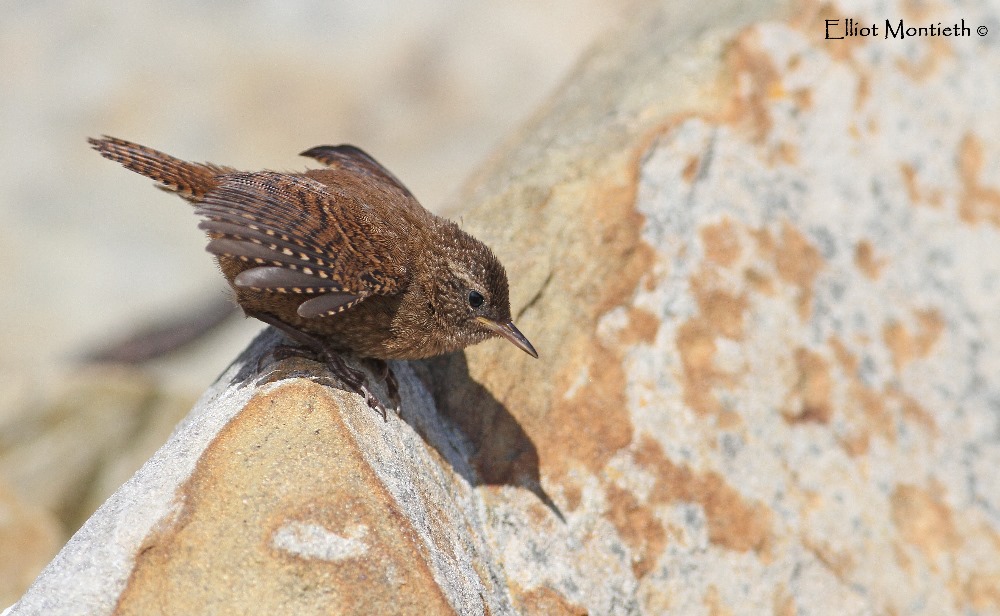 Excluding the ‘rarities’, as it’s not always about them, the island also boast a number of other migratory and resident species: Common Grasshopper Warbler, Eurasian Tree Sparrow, Whooper Swan, ‘Greenland’ Wheatear and ‘Icelandic’ Redwing where all on sale but if there was one group, actually one species that made the trip all the while bird wise then well, prepare yourself…Eurasian Wren! I love a good old subspecies, ‘Shetland’ Starling (Sturnus vulgaris zetlandicus), Fair Isle Mouse and the almighty ‘Fair Isle’ Wren were at the top of my target list. All three species where observed within the first day of the trip, but to me they meant much more than just a tick. An example of speciation in the process and an example of how such a remarkable creature can be overlooked just because ‘it’s a little brown job’. In terms of rarity then the ‘Fair Isle’ Wren is the rarest bird I’ve ever seen, with the population fluctuating around fifty pairs. It’s the closest you can get to the holy grail of subspecies in Britain, the title belonging to that of the ‘St. Kilda’ Wren, a subspecies even rarer and one which I’m currently in the process of planning a trip for.

Well then, as for the birds that was pretty much it besides on two nights conditions where good enough to allow us to ring European Storm Petrel, on another T. Gale, B. Moyes and I headed out to one of the breeding sites watch and listen as they went to their borrows. But now being fully geared out with my Viking Kestrel ED Binoculars and Viking ED Pro Spotting Scope I thought I’d attempt to improve my digi-scoping, Great Skua on the shore at North Haven with Sanderling, Dunlin & Common Ringed Plover made for a good practice session.

Fair Isle was truly an amazing experience and one I don’t regret. It’s a dream for many young birder’s I’ve spoken to make it over to the isle and if you do want to go, just do it. Apply and see if you get a place, if so first time round then that’s great. But if you get rejected like Luke Anderson did as we applied to both go, don’t take it personally, make the most of a bad situation and remember that every cloud has a silver lining. If they don’t say why you weren’t accepted then ask, ask what was missing then go away and improve in the areas that are needed.

I hope that you’ve enjoyed reading my post and found it insightful. If you’ve got any questions then feel free to get in touch and last but not least I’ve got to thank all the staff at the Fair Isle Bird Observatory along with all the residents for such an unforgettable experience. It’s one I’ll cherish and I hope to return soon to the Dream Isle.