This year was the first year that HOS, together with The Cameron Bespolka Trust, organised a wildlife and nature camp for young birders and naturalists in the New Forest. After three years of the BTO running their young birders camp up in Thetford, HOS wanted to run a similar event in Hampshire. And it was amazing!

We arrived at the Countryside Education Trust (CET) in Beaulieu at 6:00 and that’s when we got to know each other and had an introduction to the camp and what we will be doing. After we all tucked in to dinner we headed out on to Beaulieu Heath to look for hobby and nightjar. We saw 3 hobbys, a family of mandarin duck, a family of teal, curlew and heard 3 or more nightjars which was amazing! After an amazing walk around the heath getting to know everyone a bit more we finally headed off to bed at the CET. 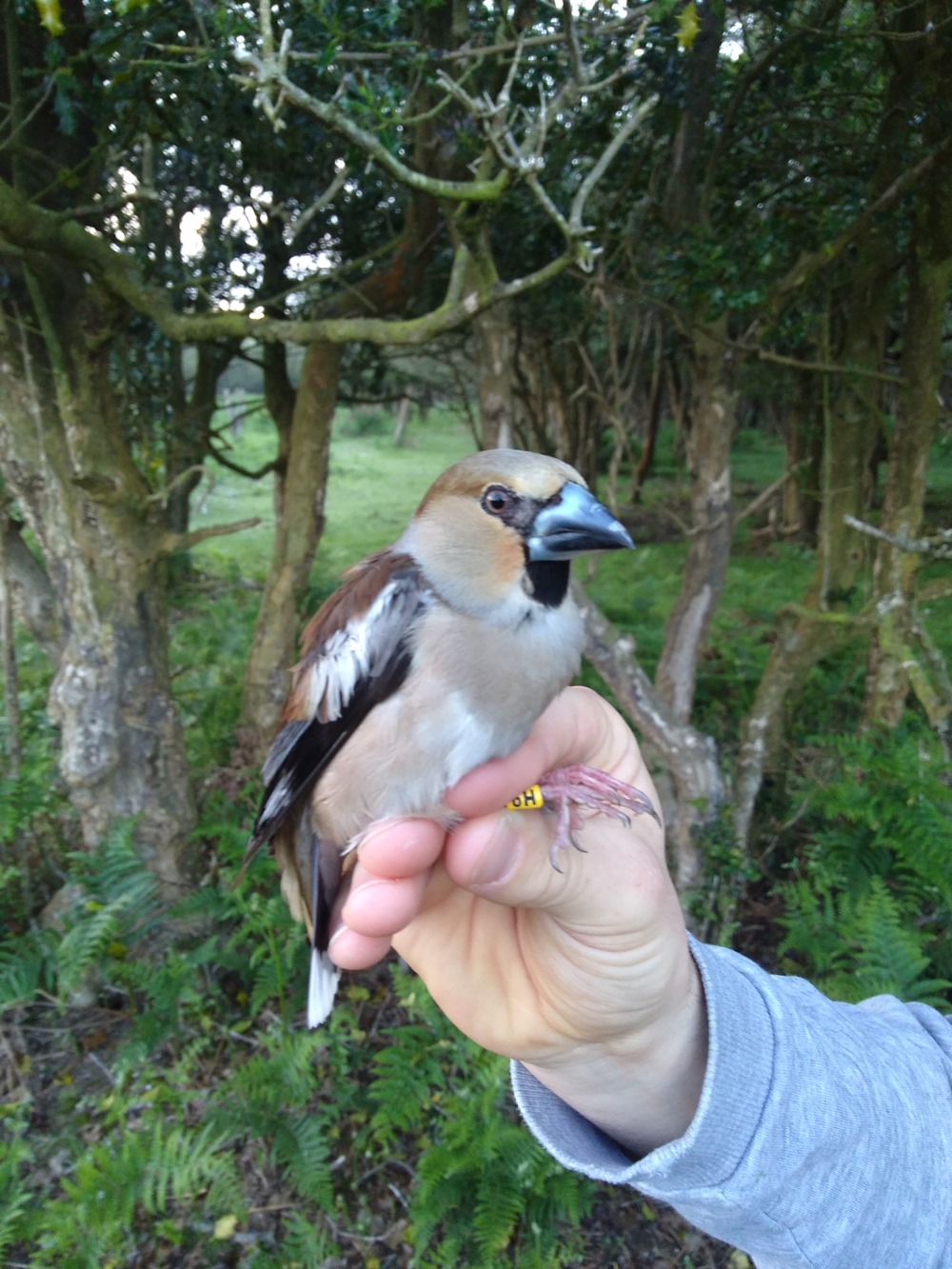 It was an early start for me and Marcus because we went out to catch a few hawfinches to ring for the children to see. We caught a total of two hawfinches which were ringing ticks for me! The children got down to the ringing so we could show them a stunning Male hawfinch! Next we had Tony Davis, a volunteer for BTO as well as Head of Scientific Research at Butterfly Conservation Trust, showed us some birds nests and wood warbler. We only had to walk a few meters until we could hear the beautiful song of the wood warbler while it was hopping from branch to branch around us. Tony then explained how he rings the wood warblers and how he uses geo-locators to track where they winter and breed! Then we went out to do some nest finding with Tony and we saw and ringed a clutch of willow warbler chicks and a clutch of redstart chicks as well, both ringing ticks for me! Suddenly 2 nightjars where flushed from the heath and sat in a tree right in front of us in the sun that gave us great opportunities to photograph the birds! After, we went to the goshawk nest for lunch and that’s where we also saw a curlew nest! We walked in to the woods with Andy Page, Head Keeper at the Forestry Commission, who was showing us where the nest was and to show us how to ring goshawk chicks. Andy climbed the tree and lowered the three chicks down very carefully to Nigel Jones, who then demonstrated the goshawk ringing! After we headed back to the CET for a BBQ and some talks about who we can get in to a career involving wildlife, which were really useful because I am thinking of where I will go to college and what course I should do. And everyone else was really interested in how they can get a job in one of their passions! We had a talk from Nigel Jones about his company, Ornitholidays,  who take people on bird watching holidays.  This was followed by Julianne Evans, Senior Site Manager at RSPB Pulborough Brooks Reserve and Tony Davis who both gave an excellent talk about jobs and careers in conservation and ornithology.  After that we went through the moth traps that we set out over night and was delighted to see a scarce marvel de jour which is a red book species so is extremely rare and can only be found in a few places! We also had privet, elephant and eyed hawkmoths! After another long but amazing day we went off to bed for a well deserved night sleep! 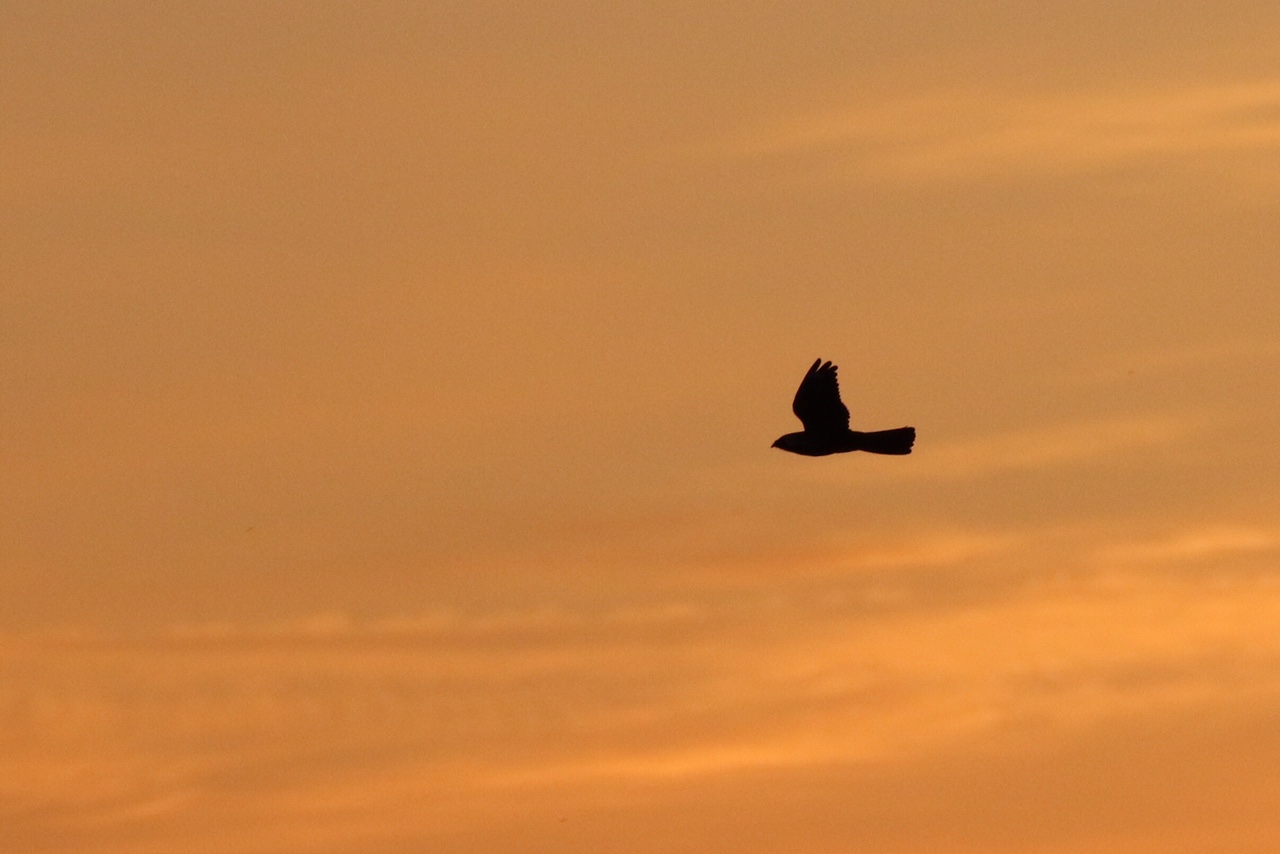 The next day (sadly out last) we all set off to Normandy marshes in between Keyhaven Marsh and the Lymington Yacht Club. Our targets there were avocet, little ringed plover, peregrine and little tern. Fortunately we got them all in a very short amount of time! Then Keith Betton, Chairman of HOS, gave us all a talk about peregrines in Hampshire and their breeding requirements. Everyone was gripped by his talk and was eager to learn more. After an amazing trip around Normandy we set of with 15 tired young people and head straight to pig bush NF for a bit of raptor watching. We slowly made our way up the hill and were greeted with a calling spotted flycatcher and after a bit of waiting and watching we had a very distant goshawk. Soon after we all sat down to count up how many species and we finished on an amazing total of 101 different bird species! My favourite was honey buzzard because I have never seen one before! Before all the parents came to pick up their shattered next generation of birders, we had a bit of time to talk to each other and say our goodbyes. The comments we got from the young people were really positive and filled all the leaders with hope that there will be more people for next years wildlife camp! My highlights were ringing my first redstart, hawfinches, goshawk chick and nightjar!

A young naturalist's guide to British bats / 31.12.20
At this time of year, the night sky is comparatively still to that of mid-summer. On top of the …
read more

Importance of having your own patch! / 30.12.20
First of all, what is a patch? A patch is an area rural or urban which is visited frequently by a …
read more