Winter in the UK brings with it some interesting migrant species, particularly the influx of Hawfinches earlier on in the winter, however my highlight of the winter in Cornwall was the increase in the numbers of Firecrests on campus.

These gorgeous little birds are very similar to Goldcrests, but have much more vibrant and impressive plumage. The species name in their scientific binomial (Regulus ignicapillus) is derived from the words fire (ignis) and hair (capillus) which becomes evident when their crest is raised.

In the photo, you can see a comparison between the two species; the Goldcrest seems a lot duller in comparison to the flashier Firecrest. I took this photo during a ringing session on Penryn campus where they were caught and ringed under the correct licensing.

Firecrests are much rarer than the relatively widespread Goldcrest, with the only resident individuals being recorded in the south east, and winter migrants recorded in the south west of England and south of Wales. Being 100% insectivorous and absolutely tiny (between 5 and 7 grams!) these birds are constantly flitting between branches in the canopy foraging for insects to maintain their condition in the cold months. If you find yourself in the south west during the winter, listen for a sharp squeaking in the tops of trees which gives these tiny birds away. If you are patient you may even spot an orange flash!

Goldcrests are in the same genus as their more colourful relation (Regulus), but they are much more common and widespread. Although their plumage is duller and crest not as fiercely orange, they are still charming little beauties. My favourite encounter with a Goldcrest was watching one just centimetres from my face as it foraged in a small bush outside the window. It was so engrossed in its foraging mission that it either ignored or was oblivious to the excited face watching eagerly on. If you haven’t seen the UK’s smallest bird in the wild yet, I urge you to make it your mission. Goldcrests are such delightful birds, for which I will always have a fondness. 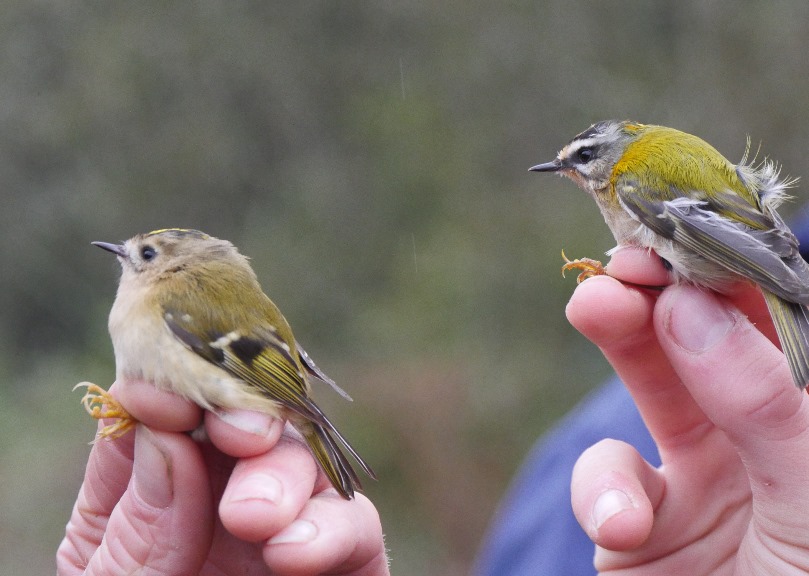